You are here: Home / News / How much money did Rick Astley make from Rickrolling!

Of course you know who Rick Astley is.

The English singer, songwriter, musician, and radio personality is widely known for his 1987 song, “Never Gonna Give You Up”, a No. 1 hit single in 25 countries.

Astley made a comeback in 2007, becoming an Internet phenomenon when his video “Never Gonna Give You Up” became integral to the Internet meme known as “rickrolling”.

On top of that, Astley was voted “Best Act Ever” by Internet users at the MTV Europe Music Awards 2008.

But the #useless question, is that: How much money did Rick Astley make from Rickrolling!

The answer will disappoint you.

Despite the video garnering millions of hits on YouTube, Astley has earned almost no money from the meme, receiving only US$12 in royalties from YouTube for his performance share… 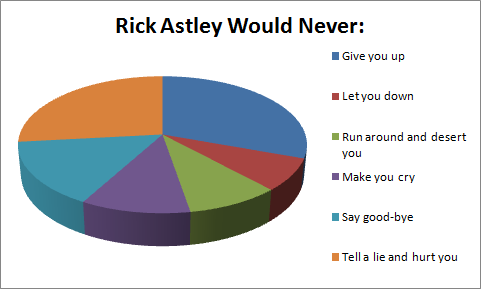 READ ΝΕΧΤ  Why someone would throw partially-eaten McDonald’s cheeseburgers at bystanders?