You are here: Home / World / Alice Cooper Trivia: 47 fun facts about the singer! 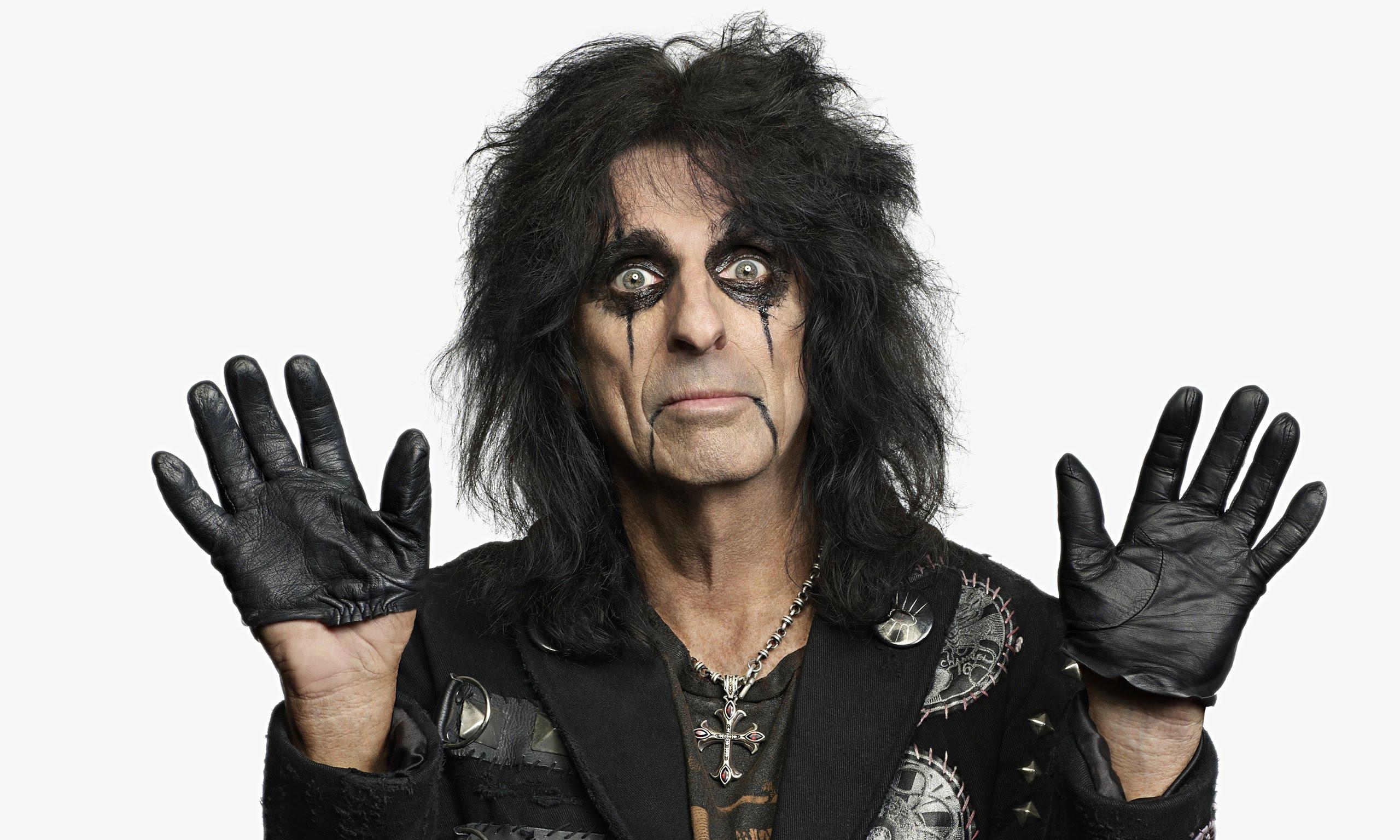 Alice Cooper is an American singer, songwriter, and actor whose career spans over five decades.

Let’s see some interesting facts about him!

2. He is the son of Ella Mae and Ether Moroni Furnier.

3. His father was a preacher in The Church of Jesus Christ (Bickertonite) headquartered in Monongahela, Pennsylvania.

4. He has English, Huguenot French, Irish, Scottish, and Sioux ancestry.

5. He was named after his uncle, Vincent Collier Furnier, and the writer Damon Runyon.

6. His paternal grandfather, Thurman Sylvester Furnier, was an apostle in the Church of Jesus Christ (Bickertonite).

9. Following a series of childhood illnesses, he moved with his family to Phoenix, Arizona, where he attended Cortez High School and Glendale Community College, eventually earning a Bachelor of Fine Arts.

10. In 1964, 16-year-old Furnier was eager to participate in the local annual Letterman’s talent show, so he gathered fellow cross-country teammates to form a group for the show. They named themselves the Earwigs.

11. They soon renamed themselves The Spiders, featuring Furnier on vocals, Glen Buxton on lead guitar, John Tatum on rhythm guitar, Dennis Dunaway on bass guitar, and John Speer on drums.

12. In 1965, the Spiders recorded their first single, “Why Don’t You Love Me” (originally performed by the Blackwells), with Furnier learning the harmonica for the song.

13. In 1966, the Spiders graduated from high school, and after North High School footballer Michael Bruce replaced John Tatum on rhythm guitar, the band released their second single, “Don’t Blow Your Mind”, an original composition which became a local #1 hit, backed by “No Price Tag”.

14. By 1967, the band had begun to make regular road trips to Los Angeles to play shows.

15. In 1968, the band learned that Todd Rundgren also had a band called Nazz, and found themselves in need of another stage name.

16. Furnier also believed that the group needed a gimmick to succeed, and that other bands were not exploiting the showmanship potential of the stage.

17. The legend is that the name “Alice Cooper” came from a session with a Ouija board, largely chosen because it sounded innocuous and wholesome, in humorous contrast to the band’s image and music.

18. One night after an unsuccessful gig at the Cheetah club in Venice, California, where the band emptied the entire room of patrons after playing just ten minutes, they were approached and enlisted by music manager Shep Gordon, who saw the band’s negative impact that night as a force that could be turned in a more productive direction.

19. Cooper’s first album, Pretties for You (released in 1969), had a slight psychedelic feel. Although it touched the US charts for one week at No. 193, it was ultimately a critical and commercial failure.

20. Alice Cooper’s “shock rock” reputation apparently developed almost by accident at first. An unrehearsed stage routine involving Cooper, a feather pillow, and a live chicken garnered attention from the press. The band decided to capitalize on the tabloid sensationalism, creating in the process a new subgenre, shock rock.

21. Cooper claims that the infamous “Chicken Incident” at the Toronto Rock and Roll Revival concert in September 1969 was an accident. A chicken somehow made its way onto the stage into the feathers of a feather pillow they would open during Cooper’s performance, and not having any experience around farm animals, Cooper presumed that, because the chicken had wings, it would be able to fly. He picked it up and threw it out over the crowd, expecting it to fly away. The chicken instead plummeted into the first few rows occupied by wheelchair users, who reportedly proceeded to tear the bird to pieces.

22. Despite the publicity from the chicken incident, the band’s second album, Easy Action, produced by David Briggs and released in June 1970, fared even worse than its predecessor, entirely failing to dent the Billboard Top 200.

23. In autumn 1970, the Alice Cooper group teamed with producer Bob Ezrin for the recording of their third album, Love It to Death. Love It to Death proved to be their breakthrough album, reaching number 35 on the U.S. Billboard 200 album charts.

24. Their follow-up album Killer, released in late 1971, continued the commercial success of Love It to Death and included further single success with “Under My Wheels”, “Be My Lover” in early 1972, and “Halo of Flies”, which became a Top 10 hit in the Netherlands in 1972.

25. The summer of 1972 saw the release of the single “School’s Out”. It went Top 10 in the USA and to number 1 in the UK, and remains a staple on classic rock radio to this day. The album School’s Out reached No. 2 on the US charts and sold over a million copies.

READ ΝΕΧΤ  Why does Starbucks use round tables?

26. In February 1973, Billion Dollar Babies was released worldwide and became the band’s most commercially successful album, reaching No. 1 in both the US and UK.

28. In 1975, Alice Cooper returned as a solo artist with the release of Welcome to My Nightmare. To avoid legal complications over ownership of the group name, “Alice Cooper” had by then become the singer’s new legal name.

29. Furnier adopted the band’s name as his own name in the 1970s and began a solo career with the 1975 concept album Welcome to My Nightmare.

30. In 2011, he released Welcome 2 My Nightmare, his 19th album as a solo artist and 26th album in total. In 2011, the original Alice Cooper band was inducted into the Rock and Roll Hall of Fame.

32. Cooper is known for his social and witty persona offstage, with The Rolling Stone Album Guide calling him the world’s most “beloved heavy metal entertainer”.

33. He is credited with helping to shape the sound and look of heavy metal, and has been described as the artist who “first introduced horror imagery to rock’n’roll, and whose stagecraft and showmanship have permanently transformed the genre”.

34. Away from music, Cooper is a film actor, a golfing celebrity, a restaurateur, and, since 2004, a popular radio DJ with his classic rock show Nights with Alice Cooper.

35. The actual ownership of the Alice Cooper name is an example of the value of a single copyright or trademark.

36. Since “Alice Cooper” was originally the name of the band, and not the lead singer (cf. Pink Floyd, Uriah Heep, Jethro Tull, Amy Meredith, etc.), and it was actually owned by the band as whole, Cooper paid, and continues to pay, a yearly royalty to his original bandmates for the right to use the name commercially.

37. In the early 1970s, a story was widely reported that Leave It to Beaver star Ken Osmond had become “rock star Alice Cooper”. According to Cooper, the rumor began when a college newspaper editor asked him what kind of kid he was, to which Cooper replied, “I was obnoxious, disgusting, a real Eddie Haskell.” However, the story ended up reporting that Cooper was the real Haskell.

38. On June 20, 2005, ahead of his June–July 2005 tour, Cooper had a wide-ranging interview with interviewer of celebrities Andrew Denton for the Australian ABC Television’s Enough Rope.

39. Cooper discussed various issues during a revealing and frank talk, including the horrors of acute alcoholism and his subsequent cure, being a Christian, and his social and work relationship with his family. During the interview, Cooper remarked “I look at Mick Jagger and he’s on an 18-month tour and he’s six years older than me, so I figure, when he retires, I have six more years. I will not let him beat me when it comes to longevity.”

40. In the period when the Alice Cooper group was signed to Frank Zappa’s Straight label, Miss Christine of the GTOs became Cooper’s girlfriend.

41. Miss Christine (real name Christine Frka), who had actually recommended Zappa to the group, died on November 5, 1972 of an overdose.

42. Another long-time girlfriend of Cooper’s was Cindy Lang, with whom he lived for several years. They separated in 1975. Lang sued Cooper for palimony, and they eventually settled out of court in the early 1980s.

43. After his separation from Lang, Cooper was briefly linked with actress Raquel Welch.

44. Cooper then reportedly left Welch, however, to marry ballerina instructor and choreographer Sheryl Goddard, who performed in the Alice Cooper show from 1975 to 1982. They married on March 20, 1976.

45. In November 1983, at the height of Cooper’s alcoholism, Goddard filed for divorce, but by mid-1984, she and Cooper had reconciled. They have remained together since.

46. In a 2002 television interview, Cooper claimed that he had never cheated on his wife the entire time they had been together. In the same interview, he also claimed that the secret to a lasting and successful relationship is to continue going out on dates with your partner.

47. Cooper and Goddard have three children together: daughter Calico Cooper (born 1981), an actress and singer who has been performing in her father’s stage show since 2000; son Dash (born 1985), and daughter Sonora Rose (born 1993).