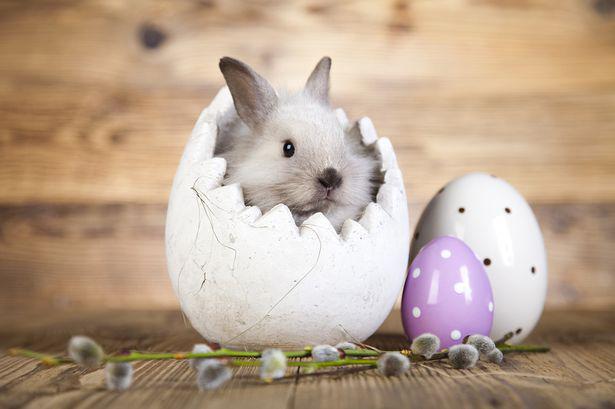 1. Easter is the celebration of the resurrection of Jesus Christ in the Christian religion.

2. Easter takes place on a Sunday, after the 40-day period called Lent. Lent is referred to as a time of fasting, but participants focus more on giving up one significant indulgence.

3. Holy Week is the celebrated during the week leading up to Easter. It begins on Palm Sunday, continues on to Maundy Thursday, Good Friday, and then finally, Easter Sunday.

4. The first story of a rabbit (later named the “Easter Bunny”) hiding eggs in a garden was published in 1680.

5. It’s estimated that Americans spend $131, on average, every Easter.
Between the candy, dinner, and decor, that’s a big chunk of change. And such a weird figure, too — hopefully that “1” in “131” is allotted for peanut butter eggs.

6. Half of the United States agree that chickens shouldn’t be dyed for Easter. It sounds like common knowledge, but some people still think that multicolored poultry is festive. While nontoxic dye typically doesn’t pose a health risk to baby chicks, it’s still a little inhumane.

7. “Easter” was named from the Anglo-Saxon goddess Eostre.
At least, this is what author Bede stated in the book he wrote back in the eighth century. This goddess in particular was known for spring time celebrations and fertility. Some believe that Eostre (also sometimes spelled “Eastre”) also had a connection with two other big Easter items — hares and eggs.

8. Egg dyes were once made out of natural items such as onion peels, tree bark, flower petals, and juices.

9. Giving eggs is a tradition that dates back even farther than Easter.

10. There’s much debate about the practice of dyeing chicks. Many hatcheries no longer participate, but others say that it isn’t dangerous to the chick’s health because the dye only lasts until the chicks shed their fluff and grow their feathers.

11. The white lily is the official flower of Easter. As they represent grace and purity, many churches and homes have chosen to decorate with the white lily for the holiday. In fact, they’re commonly known best as “Easter lilies.”

12. President Rutherford B. Hayes created the annual White House “egg roll,” which is still done today. Who knew if Rutherford thought that the egg roll tradition would last so long? The First Family will be celebrating the Monday after Easter this year, for the 138th time. More than 35,000 people are expected to show up, and the theme is set to be “Let’s Celebrate!”

14. Back in the day, pretzels were often used to celebrate Easter.

15. Americans eat about 16 million jellybeans every Easter.
Peeps may be the star of your Easter basket, but they’re not the only candy that gets a boost on Easter. While a few of them get accidentally tossed while hiding in plastic Easter grass, a majority of them are consumed by adults and children across America. William Schrafft invented the jellybean back in the late 1800s, and his original goal was to send them overseas to our soldiers. He probably had no idea that they’d one day become almost synonymous with “Easter candy.” 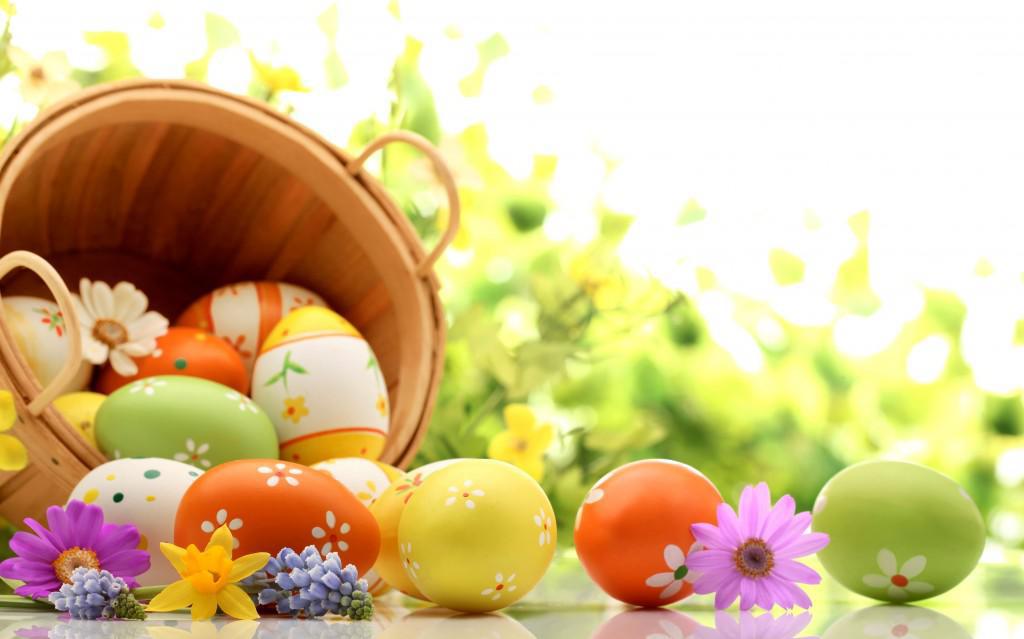 16. Eggs have been seen as ancient symbol of fertility, while springtime is considered to bring new life and rebirth.

17. Americans buy more than 700 million Peeps during the holiday.

18. Easter is the oldest, and most important, Christian holiday.
You might assume it’s Christmas, but it’s actually Easter. To understand its impact, keep in mind that very early Christians celebrated the resurrection of Jesus Christ every single Sunday, until they decided to dedicate a full, annual day to him. Even though Easter started as a pagan holiday, Christians adopted it, and many who celebrate don’t pay any mind to the pagan aspects of it (like, for example, the Easter bunny). Many believe that Easter is the backbone of Christianity, which is incredibly thought-provoking.

19. 76% of Americans think the ears of a chocolate bunny should be the first to be eaten.

20. The Easter Bunny tradition made its way to the US in the 18th century. It is believed to have originated in Europe where it was actually the Easter Hare. Other Easter traditions include wearing Easter bonnets, making Easter baskets and having Easter egg hunts. 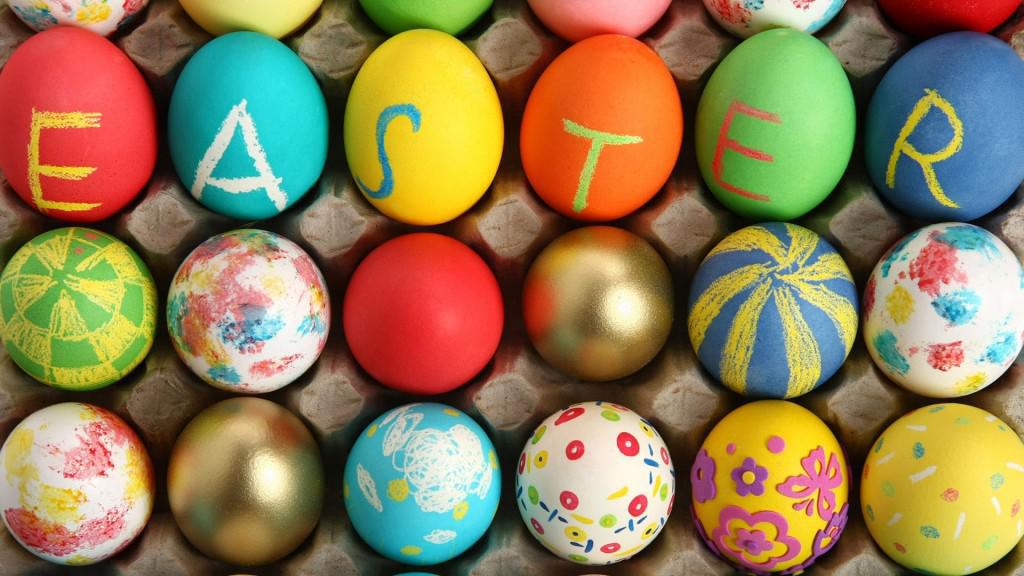 22. 70% of Easter candy purchased is chocolate.

23. Easter is celebrated at different times by Eastern and Western Christians. That’s because the dates for Easter in Eastern Christianity are based on the Julian Calendar.

24. The tallest chocolate Easter egg ever was made in Italy in 2011. At 10.39 metres in height and 7,200 kg in weight, it was taller than a giraffe and heavier than an elephant!

25. Good Friday is an official holiday in 12 US states. 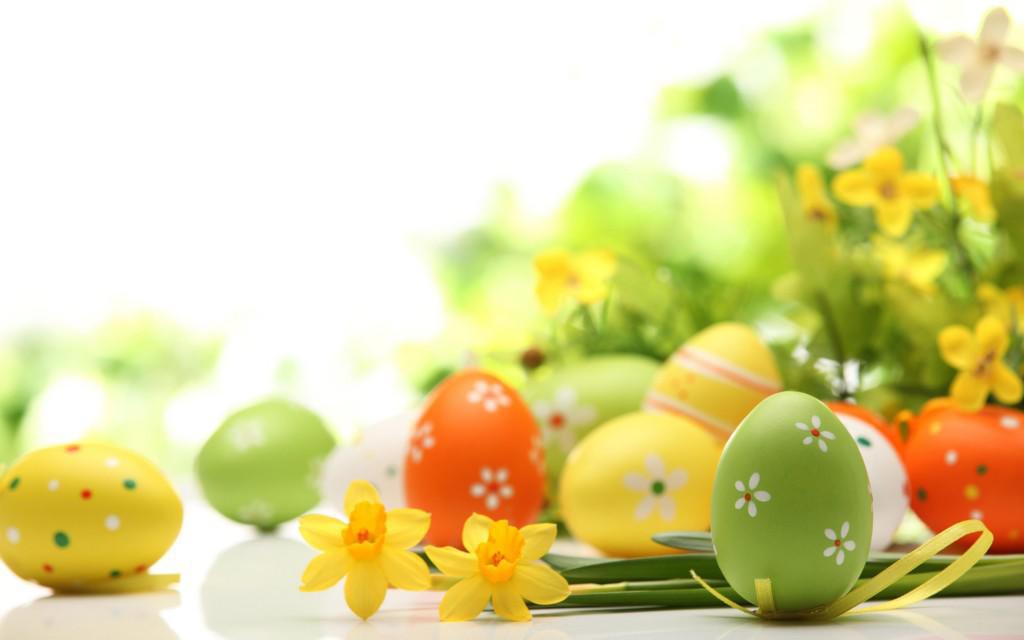 26. In 2007, an egg covered in diamonds (pictured) sold for almost £9 million. The egg is very special because, every hour, a cockerel made of jewels pops up from the top of the egg, flaps its wings four times, nods its head three times and makes a crowing noise!

READ ΝΕΧΤ  What's the advantage of paying with a credit card for your health?

27. The traditional act of painting eggs is called Pysanka.

28. The date of Passover is variable as it is dependent on the phases of the moon, and thus Easter is a movable feast.

29. “The White House Easter Egg Roll” event has been celebrated by the President of the United States and their families since 1878.

30. In medieval times, a festival of ‘egg-throwing’ was held in church. The priest would throw a hard-boiled egg to one of the choir boys, and then tossed from one choir boy to the next. When the clock struck 12, whoever held the egg, was the winner and got to keep the egg.31. 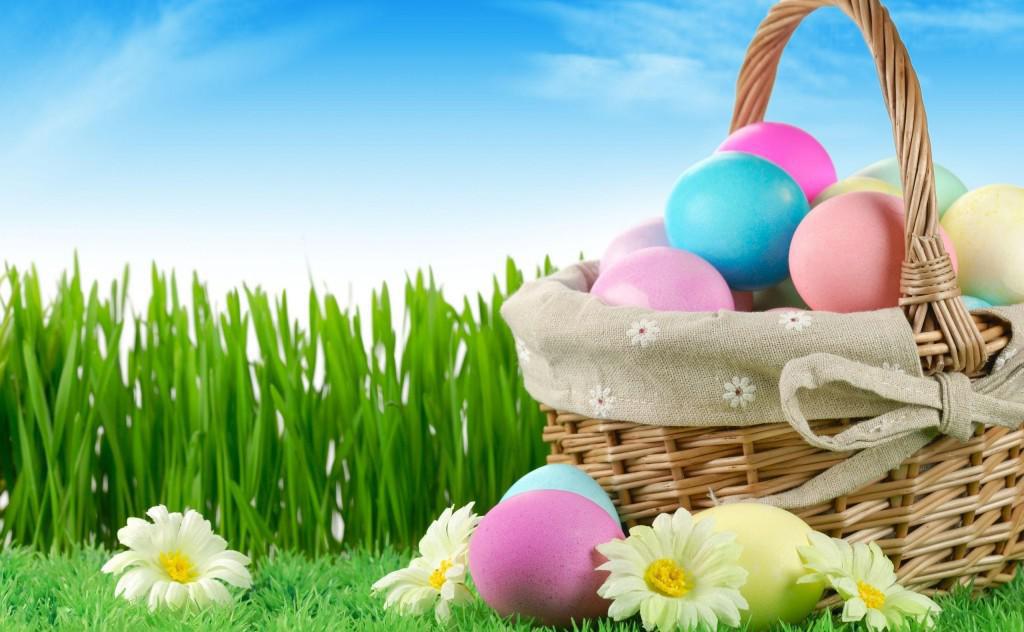 31. Americans buy more than 700 million marshmallow peeps during the Easter holiday, which makes Peeps the most popular non-chocolate Easter candy.

32. The White House hosts an Easter Egg Roll on the front lawn each year. This tradition was started by President Rutherford B. Hayes in 1878.

33. To help Americans in need, egg farmers across the country are donating more than 11 million eggs to food banks across the nation.

34. Americans consume over 16 million jellybeans on Easter, enough to circle the globe three times over.

35. 90 million chocolate bunnies, 91.4 billion eggs and 700 million peeps are produced each year in the United States.

36. Every child in the UK receives an average of 8.8 Easter eggs every year – double their recommended calorie intake for a whole week.

38. In 2007, an Easter egg covered in diamonds sold for almost £9 million. Every hour, a cockerel made of jewels pops up from the top of the Faberge egg, flaps its wings four times, nods its head three times and makes a crowing noise. The gold-and-pink enamel egg was made by the Russian royal family as an engagement gift for French aristocrat Baron Edouard de Rothschild.

39. Sales at Easter time make up 10 per cent of UK chocolate spending for the whole year. 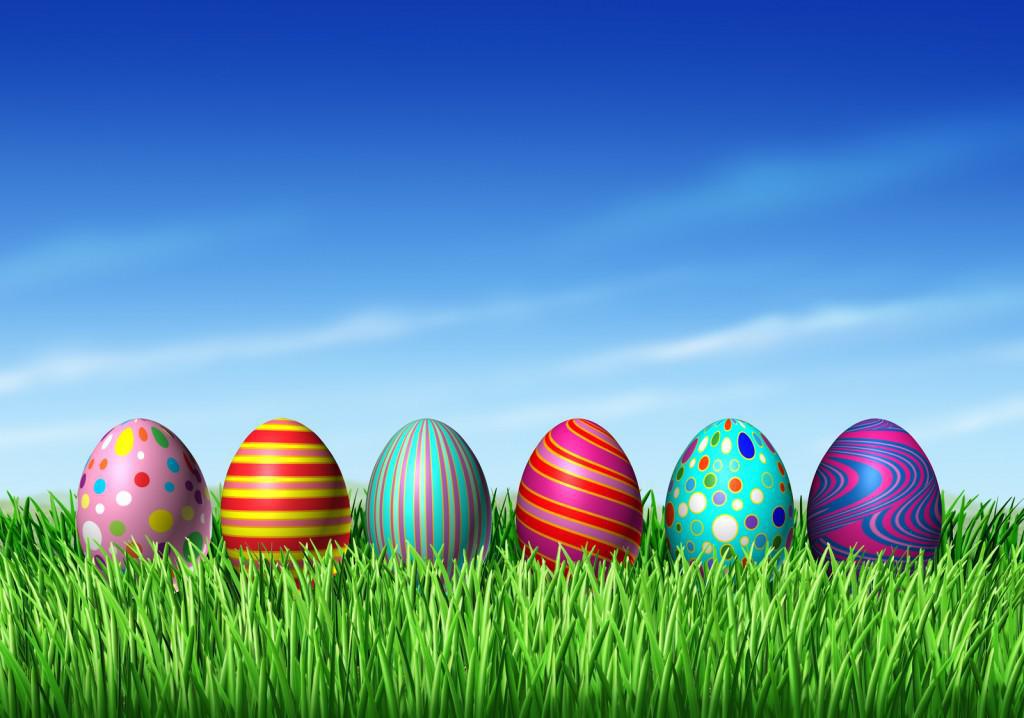 42. On Easter Sunday in Scotland and North-East England, some people have great fun rolling painted eggs down steep hills. This is also popular in parts of America, where people push the egg along with a spoon.

44. There used to be a tradition churches observed that resembled the game of “hot potato.” Here, the priest would toss a hard boiled egg to one of the choir boys.

45. The Easter egg is said to symbolize and represent joy, celebration and new life. 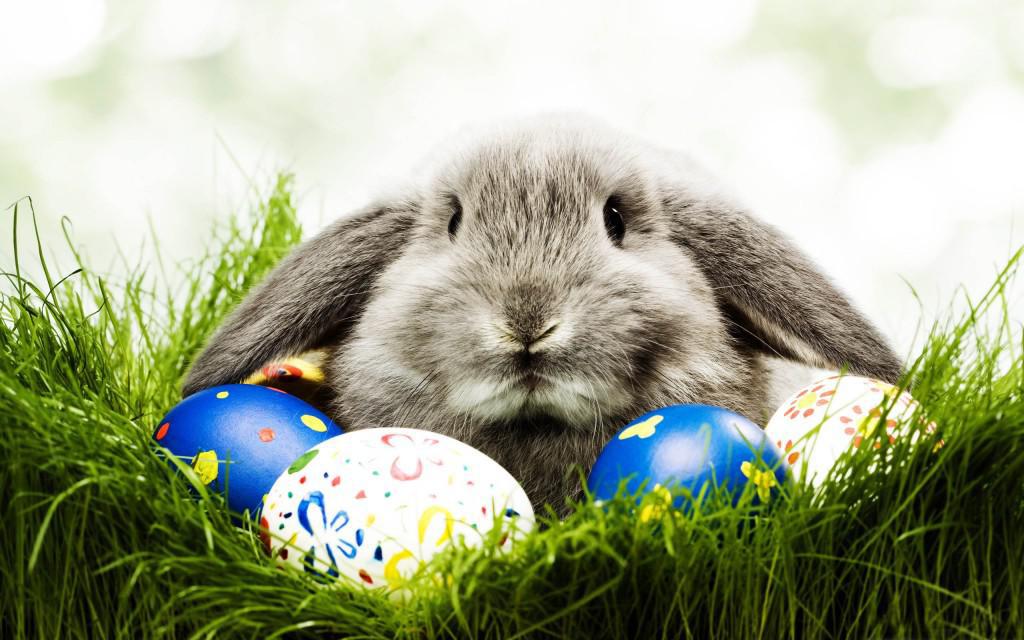 46. The idea of the Easter bunny giving candies and eggs is said to have originated in Germany during the middle ages.

47. Jesus’ death was symbolic in that he was dying for our sins.

50. Eggs were a symbol of life to Ancient Egyptians, Persians, Romans and Greeks. The custom of giving eggs at Easter originated with them. 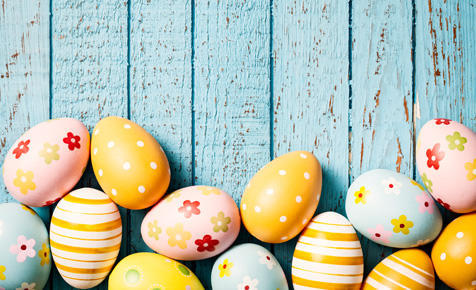 51. During Lent, people did not wear fine angels; instead they wore Easter bonnets.

52. Members of the Greek Orthodox faith often paint their Easter eggs red, which symbolizes Jesus’ blood and his victory over death. The color red is symbolic of the renewal of life, and as such, Jesus’ resurrection.

53. Some European countries follow a tradition of burning Easter fires, which represent fertility.

55. The method for determining the date of Easter is complex and has been a matter of controversy. Put as simply as possible, the Western churches (Catholic and Protestant) celebrate Easter on the first Sunday following the first full moon after the spring equinox. But it is actually a bit more complicated than this. The spring equinox is fixed for this purpose as March 21 and the “full moon” is actually the paschal moon, which is based on 84-year “paschal cycles” established in the sixth century, and rarely corresponds to the astronomical full moon. These complex calculations yield an Easter date of anywhere between March 22 and April 25. The Eastern churches (Greek, Russian, and other forms of Orthodoxy) use the same calculation, but based on the Julian calendar (on which March 21 is April 3) and a 19-year paschal cycle. Thus the Orthodox Easter sometimes falls on the same day as the western Easter (it does in 2010 and 2011), but the two celebrations can occur as much as five weeks apart. In the 20th century, discussions began as to a possible worldwide agreement on a consistent date for the celebration of the central event of Christianity. No resolution has yet been reached. 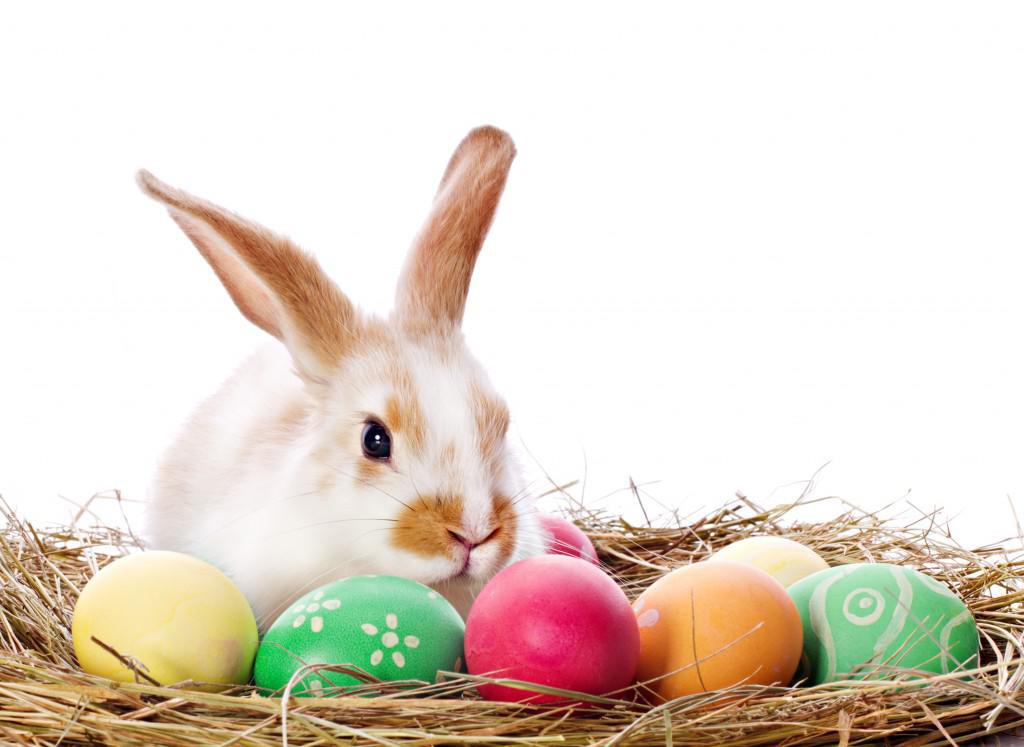